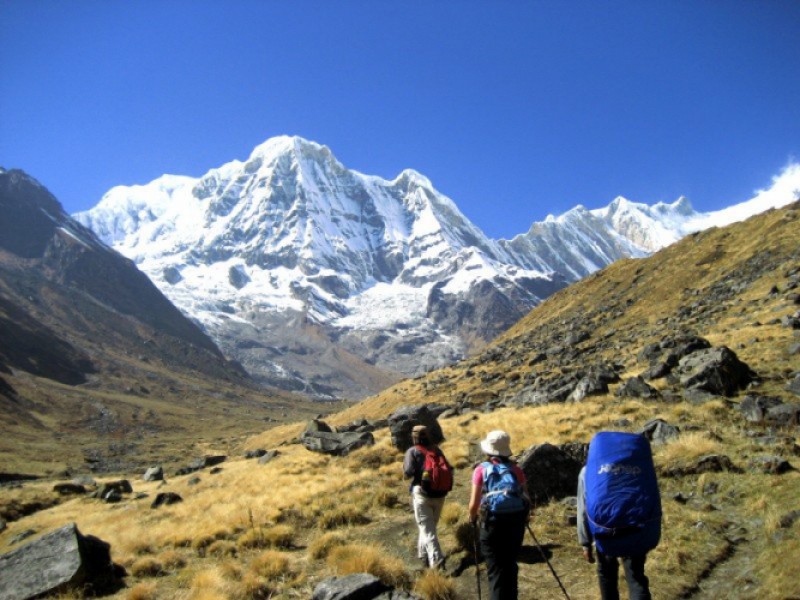 The Sagarmatha National Park is one of the highlights of the Everest Base Camp Trek. Trekking trails of the journey goes through the gorgeous Himalayan protected area and offers astounding natural sceneries of its floral and faunal species. The landscape of the park is home to many endangered species of animals as well, like the Snow-Leopard and the Musk Deer among a myriad of many other creatures.

The bamboo forests of the park provide a relaxing nature to trek through, and the beautiful scenery that the park protects is a magnificent trip that adds more worth to the final destination of the base camp.

The Everest Base Camp Trek is one of the most famous trekking adventures in the world. The trek’s popularity is also well-deserving as the adventure presents amazing highlights and features that capture the true essence of Nepal’s Himalayan life and topography. It is a splendid trip that takes trekkers from the low-lying hills of Nepal to the base camp of the world’s tallest mountain peak.

Trekking trails of Nepal, the journey goes through the gorgeous Himalayan protected area and offers shocking natural sceneries of its floral and faunal species. The Himalayan vistas of Nepal are one of the country’s biggest draw points. And the Everest Base Camp Trek also does not disappoint in this aspect. The trekking journey presents one of the most amazing and mesmerizing panoramas of the Khumbu’s Himalayas, the likes of which are not found anywhere else on the planet.

All throughout the trek, the trekkers are constantly in the company of giant mountain peaks of the Everest massif, which include many prominent peaks like Lhotse, the Cho Oyu, Ama Dablam as well as Mount Everest itself along with many more.

Likewise,  the famous Khumbu Icefall is also part of the sight as trekkers reach the base camp. The blue skyline decorated with the glowing white Everest peaks that pierce the sky are sights that are fascinating to see and wonderful to behold. They are really breath-taking and give off a sense of wonder with their enormous size and enormity.

Furthermore, it is good to know that one cannot see the view of Mount Everest from the base camp itself, but rather from the most famous viewpoint of Kalapatthar. “The Black Rock”, is famous for presenting a panorama of the entire Mount Everest massif in a spectacular fashion. Moreover, most trekkers visit the viewpoint of Kalapatthar early in the morning to watch the striking natural phenomenon of the sunrise from amidst the Everest Himalayas.

Some other features of Everest Base Camp Trek is The Lukla airport- also known as the Tenzing-Hillary Airport, is situated atop a cliff and drops off downwards at the end of the runway. As a matter of fact, the airport’s runway is considered one of the shortest runways on the planet.

Namche Bazaar is another famous highlight of the Everest Base Camp Trek. The town is quite famous for being the entrance to the Himalayas of Nepal, and its amazing amphitheater-like topography provides an outer-worldly sensation of Himalayan tranquility. Namche is also the place where most trekkers stay for acclimatization. It is a popular mountain town that provides a gorgeous view of mountain peaks like the Kongdi RI, the Thamserku and of course- the Everest from its step-like terrains.

Namche Bazaar was an important rendezvous point for Nepali and Tibetan traders in ancient times, where salt, dried meat, and textiles were exchanged.

There are many more highlights and aspects to the famous Everest base camp Trek in Nepal. The best seasons to do the trekking journey are the spring and the autumn, which last from March to May and September to December respectively. Anyone can do the trek, and it is a must-do for any trekking/adventure enthusiasts. Hillstrek makes your dream come true.  for Booking